MADI-OKOLLO. On the lush compound of the Uganda Wildlife Authority (UWA) field office, a group of vervet monkeys forage for insects and food.

Some of the agile primates somersault from the tamarind onto the UWA pickup truck, seemingly enjoying the show as others occasionally stand on their hind legs. And the chirping of the birds nearby make the place very lively. It is welcome to the Ajai wildlife reserve. 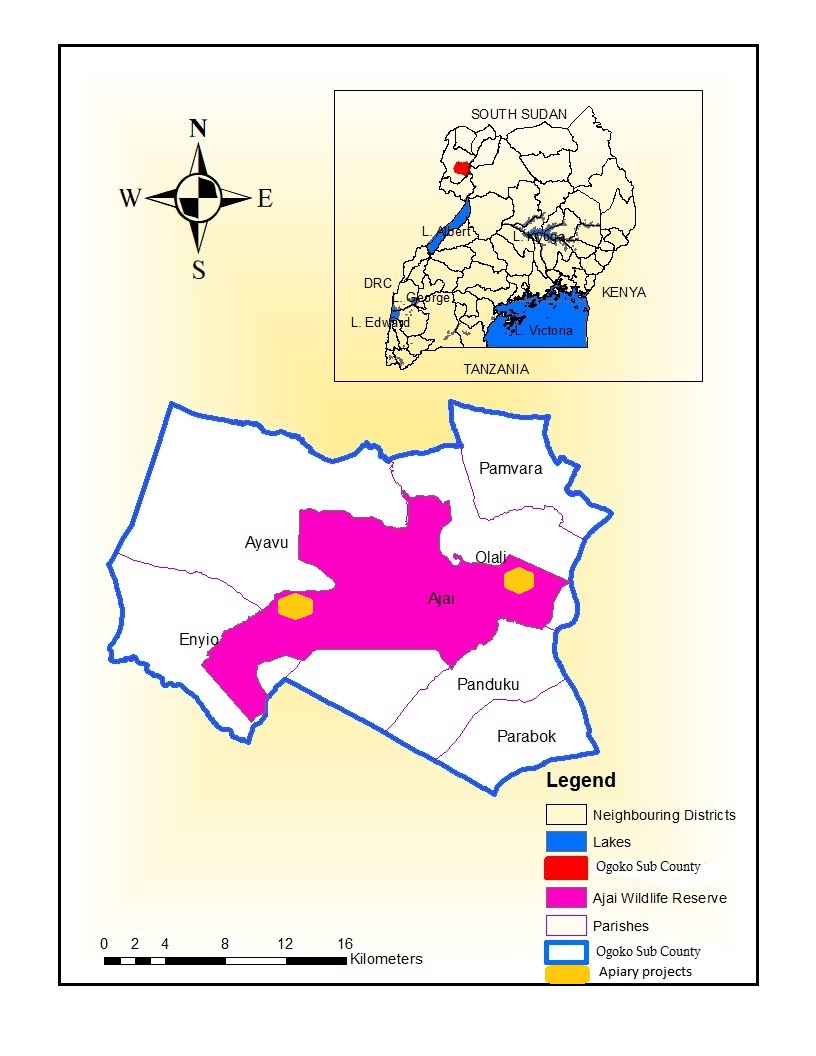 The Ajai wildlife reserve is located 52 kilometers southeast of Arua city in Ogoko sub-county, Madi-Okollo district, along the River Nile, in Uganda.

The 166 square kilometer reserve is one of the three wildlife protected areas in West Nile alongside Mt. Otze forest reserve in Moyo district and Mt. Kei forest reserve in Yumbe district, which UWA manages together with the National Forestry Authority.

Unlike those two reserves, Ajai is recovering from the heavy poaching of the 1970s and 80s that led to the loss of its treasured animal species, the white rhinos.

Babu Bakhit Olanya, the warden in charge of Ajai, says in later years it was the hunting by communities for game meat that severely affected the animal population.

Community hunting for wild animals is an illegal practice, according to the amended Uganda Wildlife Act 2019.

That law requires a person, normally a professional hunter, intending to hunt animals in protected areas to apply and obtain a class A wildlife user right from UWA after payment of a prescribed fee.

But the communities residing in the neighbourhood or at times in parts of Ajai barely observed this requirement.

“This threat of illegal activities has been on. So, we looked around  to see really what the challenges of these communities are. What is enticing them to come inside here,” Olanya said.

“We discovered that in some areas they lacked firewood because the woodlots have been destroyed outside there, and also in other parts, there is a shortage of grass for construction. Generally, poverty is much in this area; poverty is a contributing factor to poaching,” he said.

To contain the situation and protect the wildlife, UWA adopted direct engagement of the communities in what officials describe as a participatory process.

The engagements began in October 1998 according to a voluminous document detailing the records of the UWA- community interface through to 2005 when the authority remitted sh5,320,000 (USD $1,450) to Arua district to carry out a survey of the encroached areas.

Thereafter, the 27 households from the Mandali community in the Olali segment were relocated to a place called Garamba in Pawor sub-county.

Johnson Agupiyo, a resident of Ayavu village in Ogoko sub-county, said the good news for wildlife in Ajai began in 2010 when UWA conducted its first ground count of the medium to large animal population in Ajai.

It proceeded to sign six memoranda of understanding that allowed sustainable utilization of resources such as papyrus, reed, firewood, thatching grass and building poles by the communities with the guidance of the reserve management. These are listed as Class F wildlife user rights in the Wildlife Authority Act.

Agupiyo’s Ayavu beekeepers, a 28-member group that started as a village savings and loan association along with Olali beekeepers, were selected by UWA and allocated areas within the wildlife reserve for apiary.

He says although the actual hives arrived only in 2017, the community began close collaboration with UWA immediately after the signing of the project memorandum.

“Our vigilance was heightened when they raised our hopes to earn income with the apiary offer. In return, we were obliged to feed UWA monthly reports on poachers, intruders and stray domestic animals,” Agupiyo narrated.

The result of this collaboration was noticeable, especially for the baboons whose population shot from 373 in 2010 to 548 when UWA carried out the second ground count in 2015.

However, the dominance of the baboons had a negative bearing on the population of the antelope family which they prey on. This compelled UWA to introduce a pair of leopards to check the baboons.

Nonetheless, both the local community and UWA agree that their close collaboration has generally been encouraging for wildlife conservation and animal population recovery in Ajai.

These are the baboons, bushpigs, bushbucks, black and white colobus monkeys, vervet monkeys, Duikers, Kobs, the orbi and warthogs.

At the same time, the surveys found that the nature of illegal activities changed from rampant poaching to charcoal burning and rearing of domestic animals.

For instance, in 2010, the ecological researchers recorded that 203 arrows, 100 bows, four knives, two pangas, three pairs of military boots and one military raincoat were impounded in just one operation to counter communal hunting.

Four carcasses of duikers, a carcass of python and guinea fowl were also seized in that operation during the survey period, while between July and August in 2015 only 16 snares were impounded.

They encountered 37 charcoal kilns and grazing of 15 cattle, 15 sheep and three goats in the wildlife reserve area.

When the hives eventually arrived in 2017, the Ayavu beekeepers were given 100 hives while the Olali group comprising 60 members received 200 hives procured by UWA, according to Olanya.

And the benefits have been mutual for both wildlife and community members.

“Previously people used to kill the baboons, monkeys and antelopes. But since the beginning of our cooperation with UWA, we do not kill them,” says Margaret Driciru, the vice chairperson of Ayavu beekeepers.

She explained that in order to keep harvesting natural resources from the wildlife reserve and continue with the apiary project, UWA obliged them to protect the wild flora and fauna at Ajai.

Driciru says that her group has since harvested and sold honey five times and saved sh850,000 (USD $231) in their account.

The bond between UWA staff and the community members has also strengthened.

The UWA staff accompany the beekeepers when they arrange to clean around the hives, an activity normally done on Tuesdays and Fridays, and the farmers notify UWA when they go to harvest honey.

“What we find challenging are the baboons, monkeys, rats and black ants – but the baboons and rats are the greatest menace,” Driciru points out.

She says the bees decolonise when the rats enter the hives to construct their nests while the baboons jump to rest on the hives, thereby breaking many of them.

The black ants also cause the bees to flee from the hives when they enter to suck the honey.

However, it’s possible to overcome some of these challenges if the farmers grasp the nitty-gritty of beekeeping.

Escole Adrole, a seasoned Oxfam trainer on apiary, says such a project would yield better results for both wildlife protection and community empowerment if some basic necessities and start-up resources such as the hives were provided to the communities.

“Apiary is the simplest project a farmer can do for poverty eradication. Your initial expense would be on buying the hives,” he says.

Adrole, who has 20 years of beekeeping experience, says UWA and the beneficiaries needed to make the selected apiary sites suitable by making sure the dense canopies of the trees were reduced.

“Bees don’t live in dark forests. They need shade but the place must be clear. They need flowering plants for forage, for nectar,” he explains.

He says where there is insufficient forage the farmers can establish it by planting live fences around the apiary which they should clean around to create a fireline.

To eliminate the challenge of rodents, lizards, snakes and black ants, he recommends keeping the apiary site clean, using rat guards and applying ointment, among other measures.

Adrole admitted that he did not have a definite answer to the stubborn monkeys and baboons but indicated that the crowding of hives in one place was not a correct practice.

He says at most there can be 50 hives in a single apiary setting that should be spaced within a distance of 50 metres by 50 metres, since the bees will be competing for forage and water.

That way, he says the farmers would be harvesting about 15 kilograms of comb honey from each hive. In the last harvest, the Ayavu beekeepers reported that they harvested 25 kilograms of honey from all the 40 colonised hives, while the rest of their hives are empty of bees.

Adrole says with the right spacing of hives and good maintenance practices, farmers harvest bigger quantities of honey and earn more money. And the game rangers can get more support from the people to protect the wildlife.

This report was produced with the support from InfoNile and Internews’ Earth Journalism Network.