The road leading to Murito meanders through small and large scale agricultural farms but reaches this once infamous village in Tarime, Mara region of Northern Tanzania.

Two years ago, before a gold refining pond was constructed in this village, Murito was like any other remote villages in northern Tanzania.

But now, this dynamic community, where Mrs Eliza Mogesi, a peasant and a mother of three children resides, is well-known in Tanzania for hosting a gold refining pond that is saving Mara River from mercury contamination produce by artisanal miners who mine mercury on the banks of the river in Tarime District. 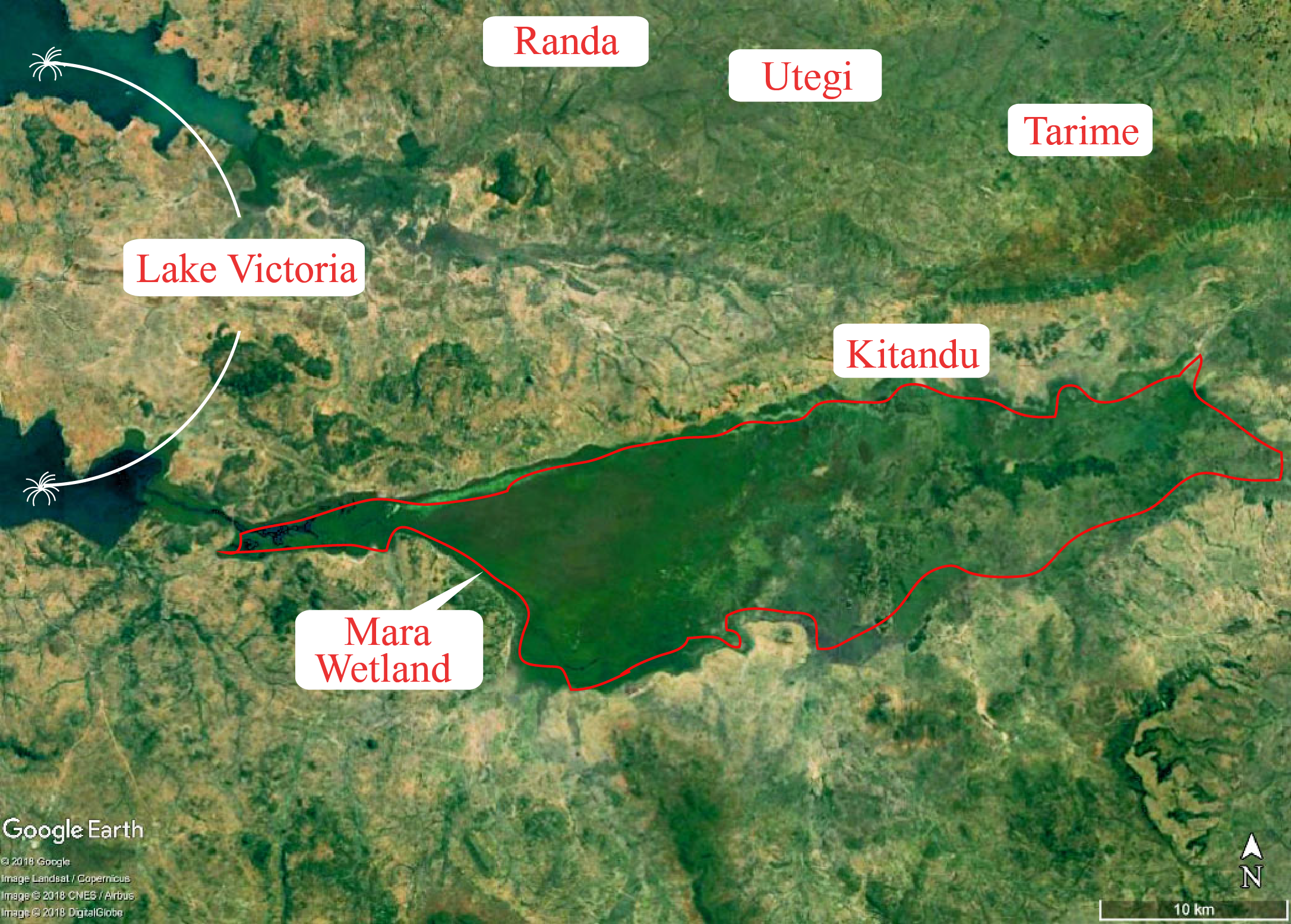 Before this pond was constructed, the artisanal miners used to wash their gold ore in small streams flowing straight into Mara River.

“We want those artisanal miners still washing their gold in water sources to stop it henceforth because mercury is dangerous to our health, says Mogesi.

“Mara River is our main source of water and we want the river free from any pollution.” 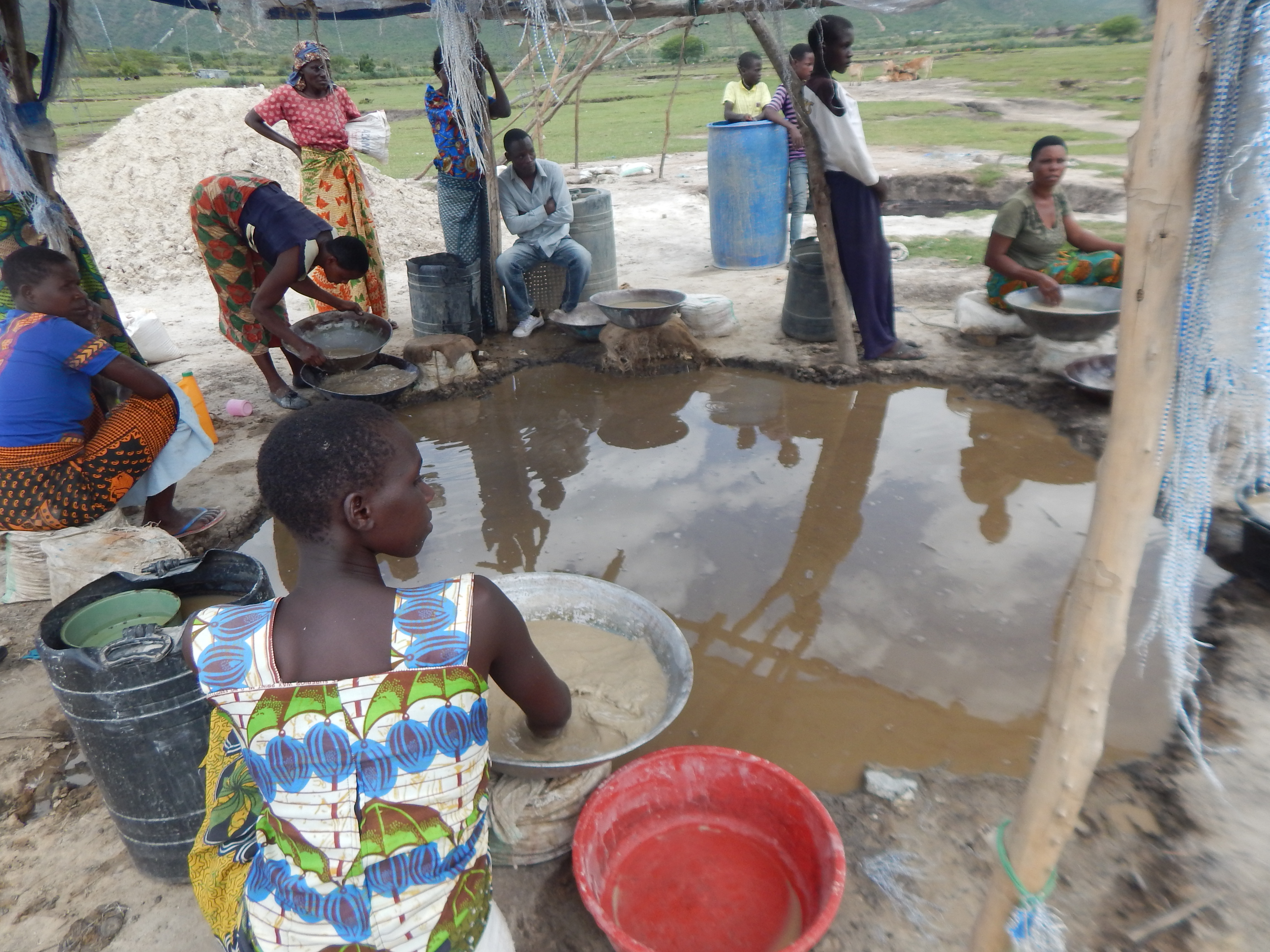 How the miners used to wash gold before the construction of the pond.

Mara River basin sustains the livelihoods of over 1.1 million people across Kenya and Tanzania. Some of these living in parts of Tanzania are at risk of mercury toxicity.

According to physicians, heavy exposure to mercury damages the central nervous system, endocrine system, kidneys, and several other vital human organs. And women who get exposed to mercury in pregnancy risk giving birth to children with serious birth defects.

For many years, pollution due to gold mining has been one of the environmental challenges facing Mara River, a water body shared by two neighboring countries: Tanzania and Kenya.

The valley has a long history of gold mining, beginning from discoveries by the German colonials near Lake Victoria in 1894 and the opening of the first gold mine in 1909.

In the late 1990s, foreign mining companies came onto the scene, investing largely in gold exploration. Several large mines were erected, including the North Mara Gold Mine: one of three mines operated in northwest Tanzania by Acacia Mining, a London-based company.

Deforestation, irrigation farming and livestock keeping are other human activities threatening the existence of the river which starts in Mau forest on the Kenyan side.

The river runs through Masai Mara Game Reserve in Kenya and Serengeti National Park in Tanzania before draining into Lake Victoria on the Tanzanian side.

Besides supporting livelihoods of people living in the river basin, protection of the river is essential for the development of conservation and tourism sectors in the two countries. 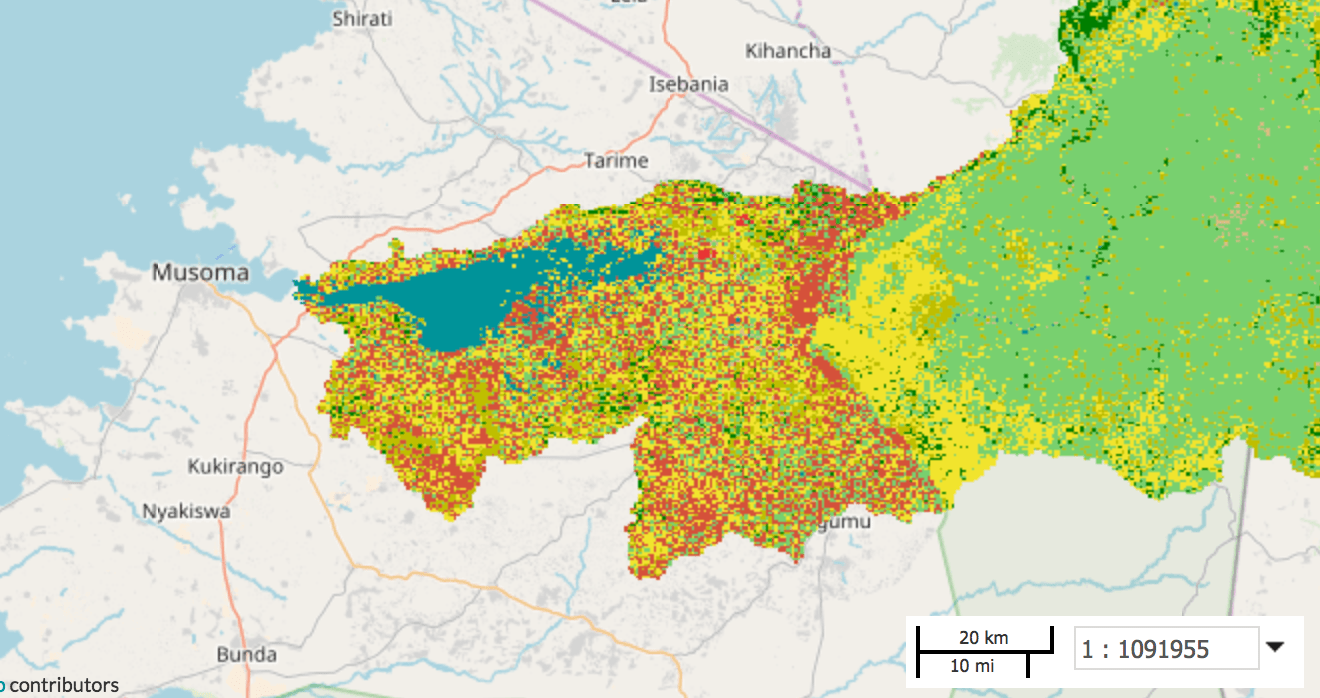 A long journey to save Mara River from pollution caused by artisanal miners began about two years ago with the construction of a gold refining pond at Murito village in Tanzania’s district of Tarime, Mara region. 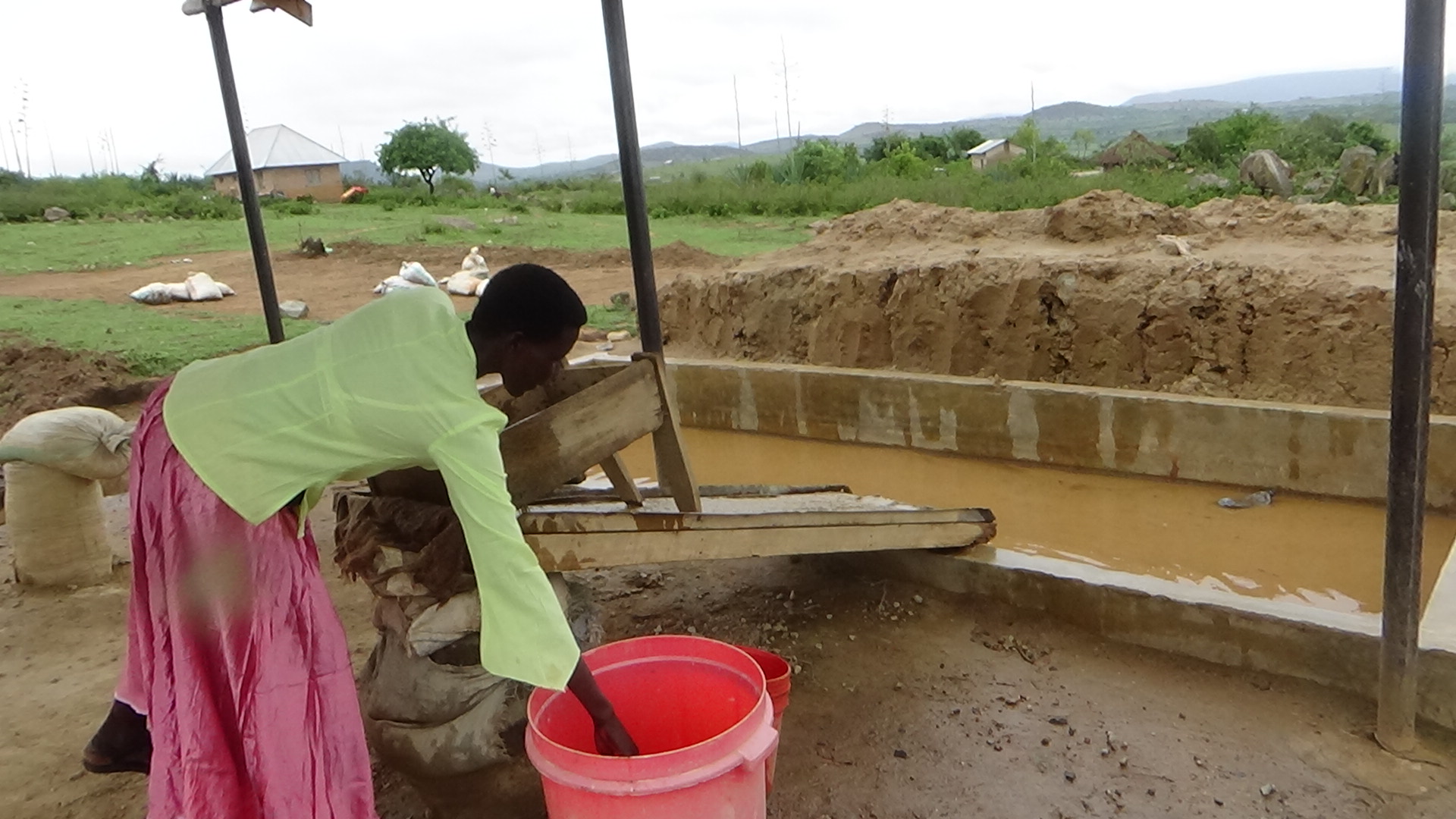 The mercury retention pond aims at protecting the river from damage caused by gold mining. 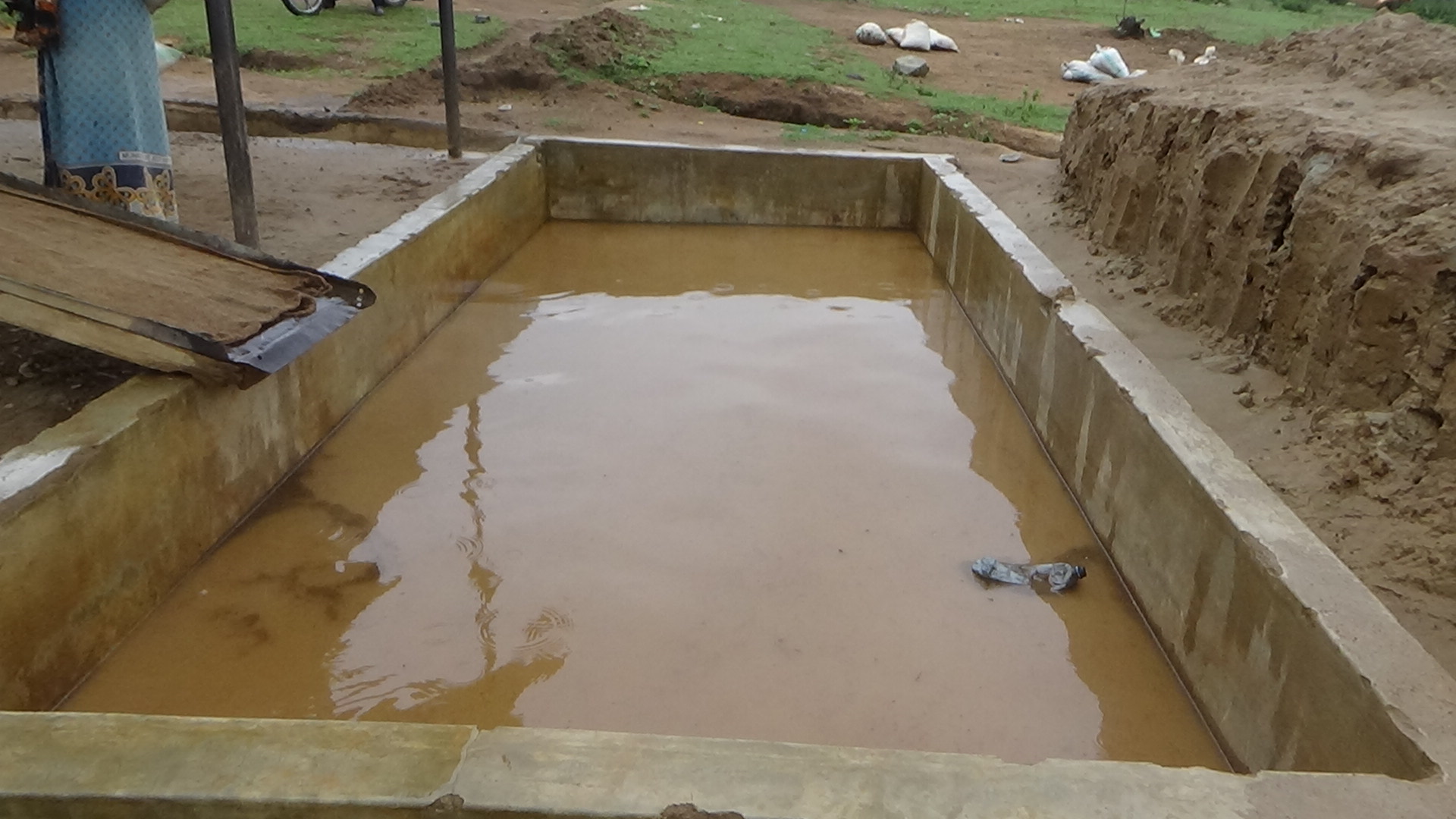 Dozens of artisanal miners that had been washing their gold ore in small streams flowing straight into Mara River were relocated to this pond which was designed purposely to protect Mara River from mercury contamination.

In particular, the pond is aimed at protecting the river from further damage caused by artisanal miners belonging to Kwinya Mining Cooperative Society.

It was constructed with support from the World Widelife Fund for Nature (WWF), one of the world’s leading conservation organizations.

“The pond has been useful in controlling mercury contamination; no water is draining into the sources as was the case in the past 15 years,” notes Robert Marwa, the chairperson Kwinya Mining Cooperative Group.

Presently, the group has 36 artisanal miners, nine of them women who depend on small scale mining activities as their main source of income in the remote village of Murito, Kemambo ward.

Besides preventing mercury from flowing into water sources, the gold refining pond provides a friendly environment for the artisanal miners to conduct their activities. 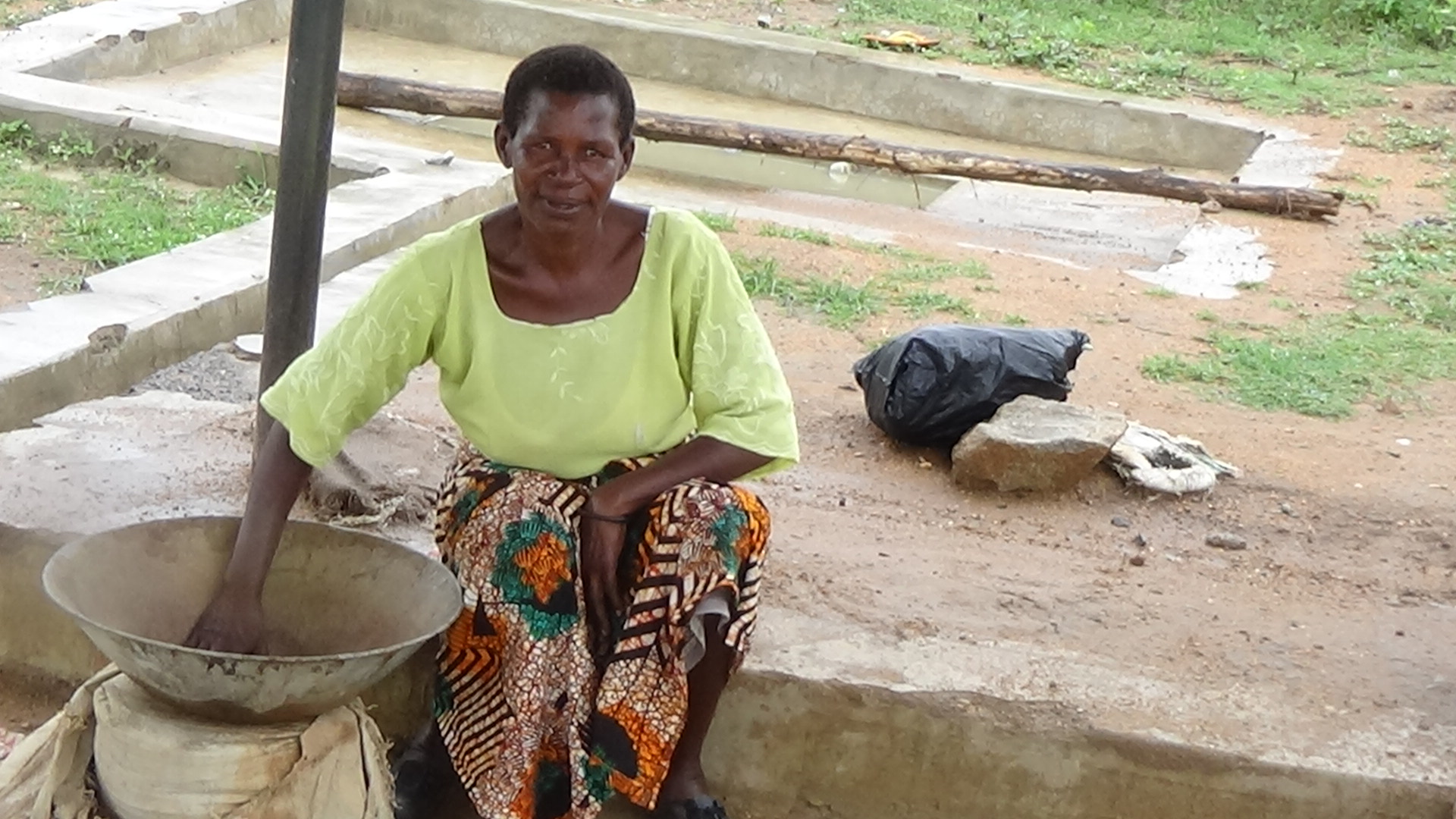 “Things are now changing for the better in our area, with trees and grass blossoming around the water sources as you can see after we moved to the gold refining pond,” stresses the visibly happy Marwa.

“We are now conserving environment and even the working condition is attractive.”

But according to Marwa, there are many artisanal miners still conducting their activities along the river bank and he wants them relocated to the pond. 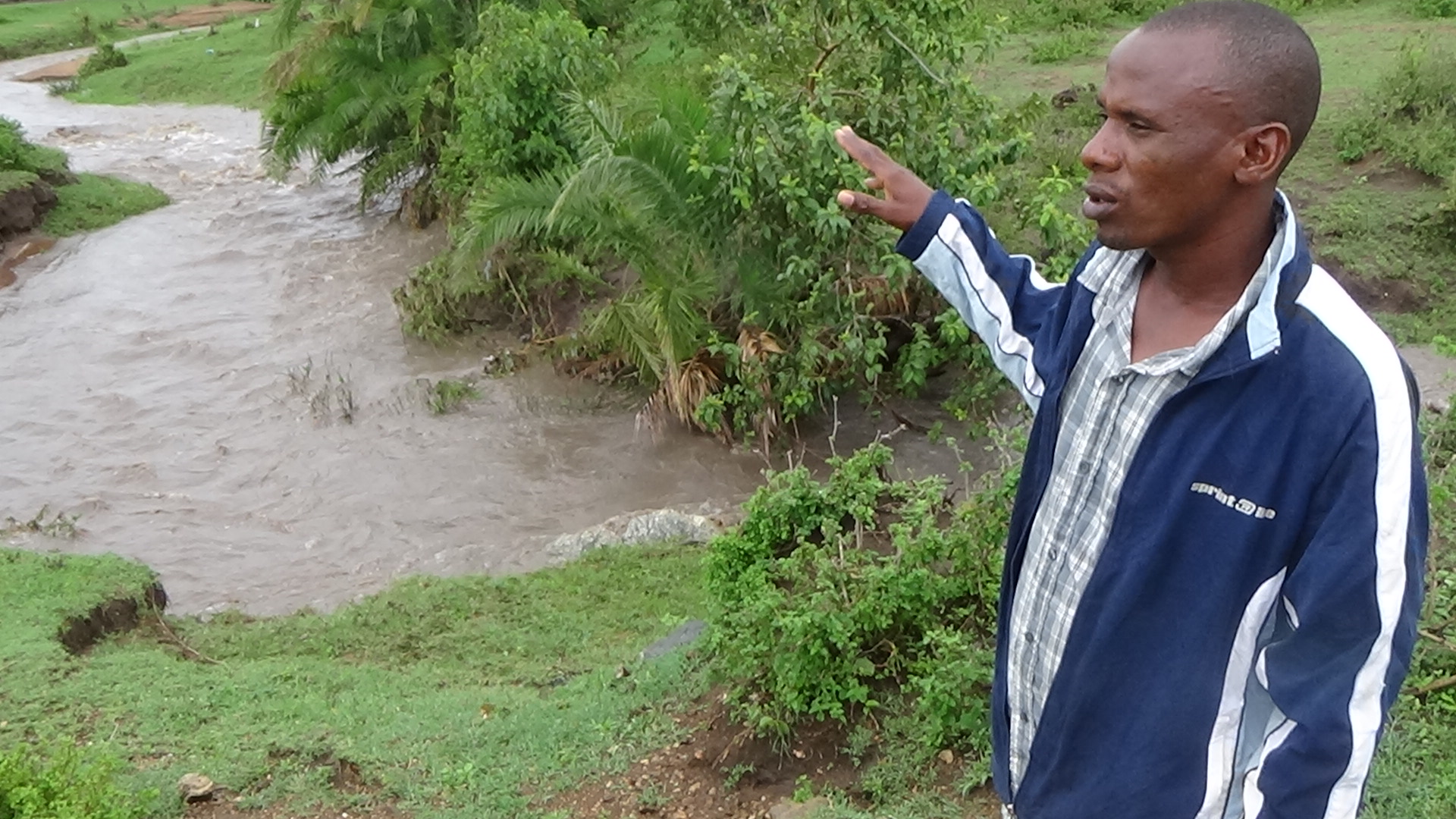 A local resident shows one of the Mara River tributaries that was in the past being polluted by artisanal miners with mercury.

Tanzanian government officials at Kemambo ward have been carrying out awareness campaigns to educate the villagers on mercury and its environmental and aquatic impacts, and why people should not conduct gold extraction near water source.

“Some artisanal miners have already moved away from the water source but others opted to use their homesteads instead,” discloses Paulo Maisori, the Kemambo Ward Executive Officer (WEO), further stressing that, “this is more dangerous but we continue giving them education on the effects of mercury.”

Maisori welcomes the mercury retention pond option and asks other partners including government to support this initiative.

“The mercury retention pond is a good example that should be emulated by other villages having artisanal miners conducting their activities close to the river,’’ contends Maisori.

“Apart from pollution, mercury is also a poisonous substance. That is why we are working together with other environmental stakeholders like WWF for intervention,” notes Ntora.

Already the pond has started making a huge impact, according to Kanuni Kanuni, the WWF Project Officer for Mara River Fresh Water Programme.

“A good number of artisanal miners have started constructing their own ponds, borrowing a leaf from the one we constructed for Kwinya group. The achievement is substantial,” states Kanuni.

Construction of the pond, he says was part of the initiatives supported by WWF to protect Mara River from pollution caused mostly by human activities.

WWF has been working with the government of Tanzania, local communities and other partners along Mara River Basin to implement projects aimed at improving the quality and quality of water as well as preserving all forms of the Serengeti ecosystem.

“We wanted the pond to serve as an example so that we can reduce pollution in Mara River and we are happy with the positive response,” says Kanunu.

“Some villagers have gone a step further by constructing fish ponds of similar size. They are now rearing fish and this would be another source of income for them.”

However, the WWF official said the decision by some artisanal miners to conduct gold recovery at their homes should be prohibited.

“Some artisanal miners who had vacated the water sources are now conducting their activities at home. This is dangerous for their health and it should not be left to continue,” insists Kanunu. 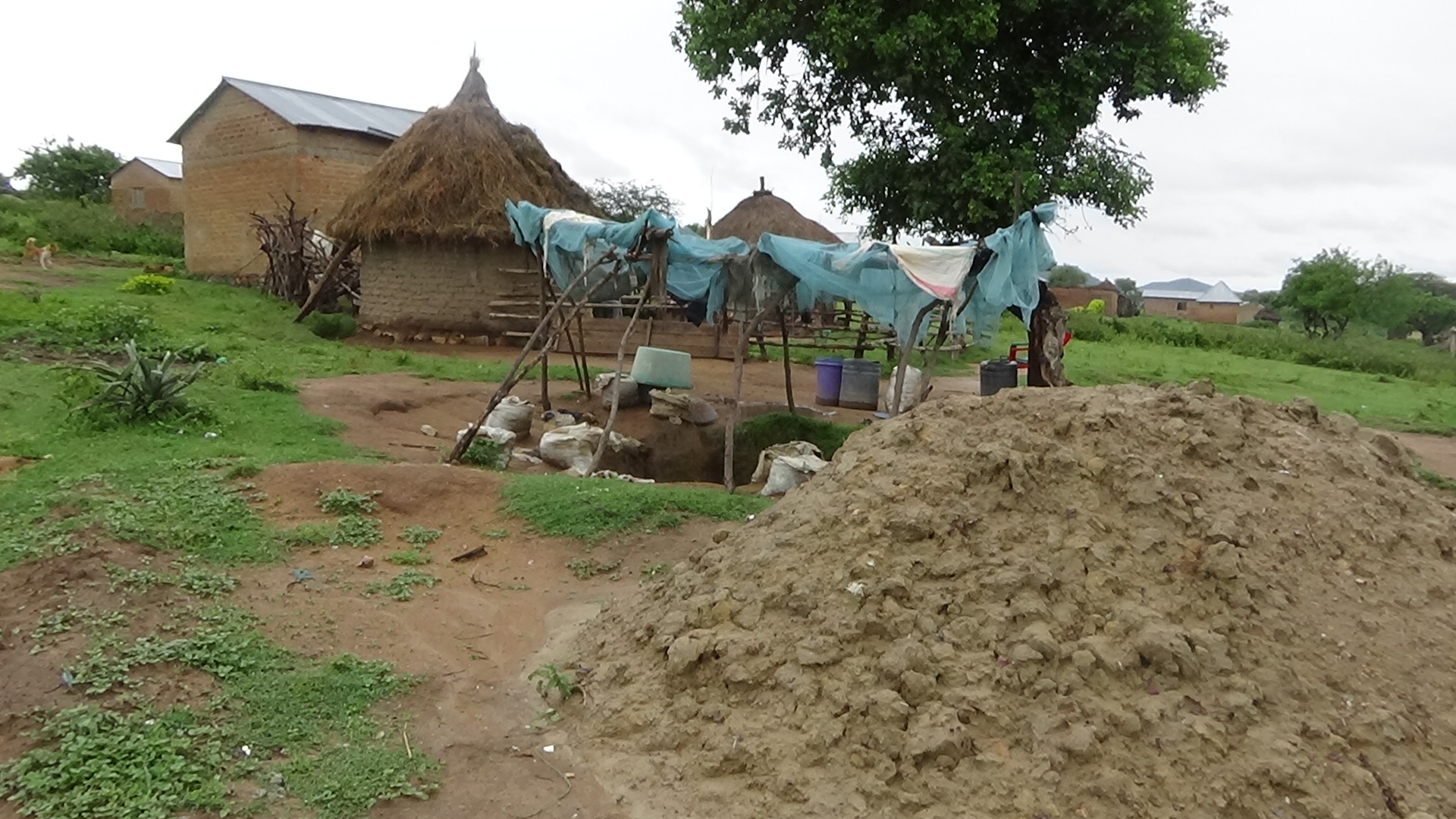 Some artisanal miners have opted to wash gold after an order to vacate from river sources.

Speaking during official handing over and inauguration of the pond , the Tarime District Council Executive Director (DED) Apoo Castro Tindwa ordered all artisanal miners residing along the river bank to refrain from washing their gold-ores in areas which pollute the river and relocate to safe ponds which also do not put their health at risk.

Artisanal miners belonging to Kwinya Mining and Cooperative Society cite shortage of water during the dry season as a hitch, after moving to the mercury retention pond.

“We need a machine that can help draw water from Mara River especially during the dry season. That is the problem we are now facing,” reveals Chacha Mtari, an accountant with Kwinya group.

There are about 4,000 artisanal miners operating in several villages around Mara River basin according to Martha Mahule, an Environmental Management Officer at Tarime District Council. 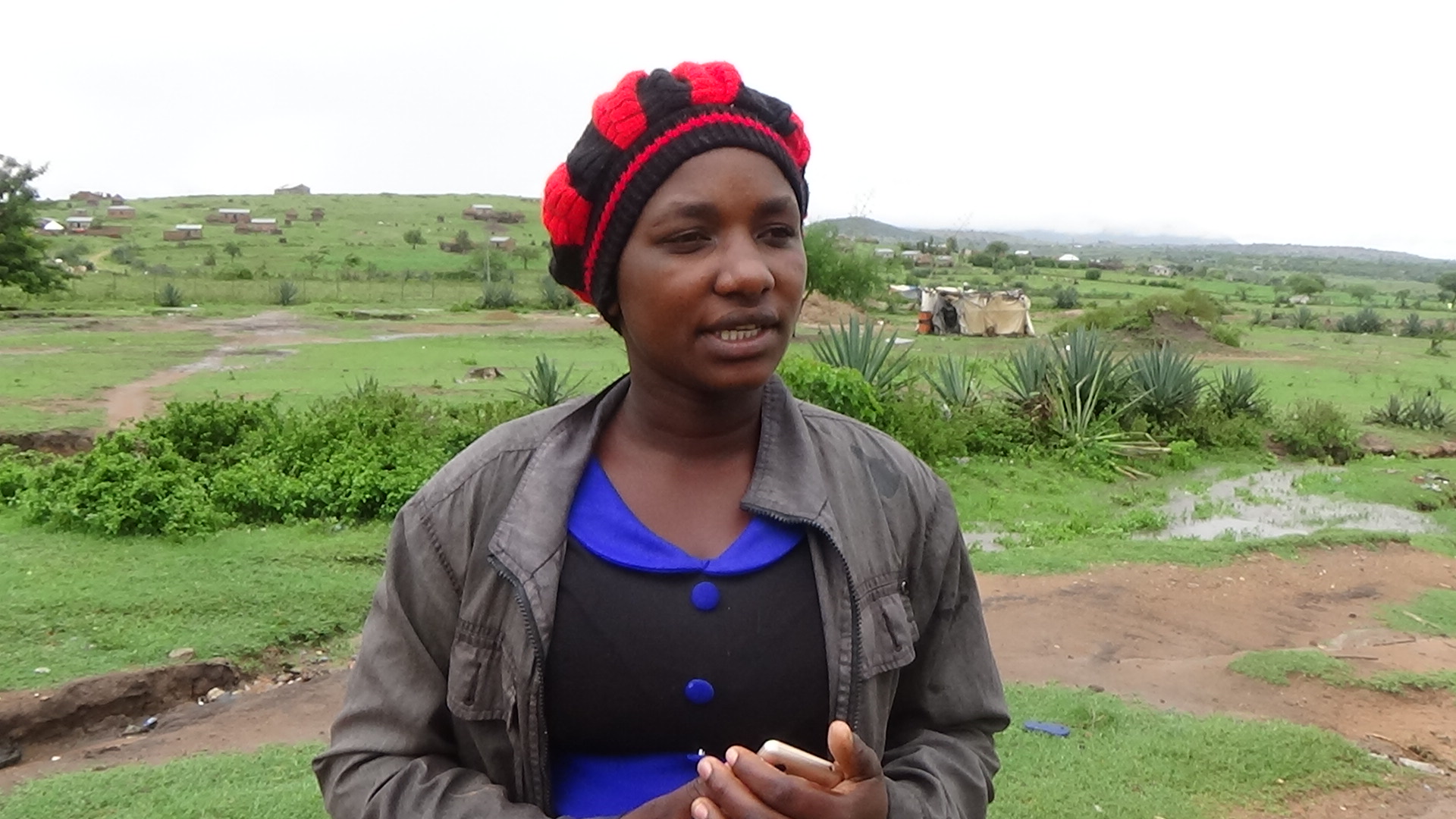 A local resident explaining the dangers of mercury pollution from gold mining on the Serengeti ecosystem.

The government of Tanzania has been providing education to the artisanal miners from these villages on the effects of mercury and the importance of refining their gold far away from water sources.

“We usually tell them to use protective gear like gloves when using mercury and stay away from water sources,” notes Mahule.

Nevertheless, she is disappointed that some artisanal miners, especially men are reluctant to vacate water source areas.

“Artisanal miners in Murito village were a nuisance but now they have moved to the retention pond supported by WWF. The problem is now Matongo village,” she points out.

She wants the gold processing activities carried out at designated areas only and artisanal miners defying this punished.

“Gold should never be processed at home; we banned this activity and issued a warning in writing. It is very risky but some people have opted to turn a deaf ear to our appeals. Maybe we’ll need to be accompanied by the police,’’ says Mahule.

She reveals that the villagers were also educated to use other safe means of processing gold instead of mercury which puts their health at risk.

Mahule insists that it is imperative to allocate special areas for artisanal miners rather than leaving them to operate anywhere they prefer.

Meanwhile, there are worrying reports that irrigation farming, deforestation and other human activities may plunge the river into siltation.

“Siltation is another new challenge facing Mara River due to increased human activities that are not environmentally friendly in the river basin,” says Mahule.

She wants immediate measures to be put in place before the situation gets out of hand.

In an effort to create conservation awareness of the Mara River Basin, Tanzania and Kenya hold celebrations to mark Mara Day annually.

The 10th Sectorial Council of Ministers of Ministers for Lake Victoria Basin held in the Rwandan capital, Kigali in May 2012, declared every September 15 the Mara Day, to coincide with the annual migration of wildebeest from Serengeti National Park in Tanzania and Masai Mara Game Reserves in Kenya.

The two countries contend that conservation of Mara River is also important for continued annual migration of wildebeest crossing the river every year.

The great migration attracts thousands of tourists from different parts of the world, consequently earning the two nations the much needed foreign currency.

The Mara River Day is marked on rotational basis with different themes aimed at promoting sustainable conservation of the river basin for the present and future generations.

This article was made possible thanks to support from InfoNile and Code for Africa.

Editing and data visualizations by Fredrick Mugira, Annika McGinnis and Code for Africa.