He moved to the remote gold mining hamlet from Dar es Salaam, the busy commercial city of Tanzania, few years ago, hoping to grab a gold fortune, unaware that his destiny was in selling water.

Today, water is a lucrative business within small scale gold mining communities. This is because of the acute shortage of clean and safe water facing Chunya District in Mbeya Region, on the Southern highlands of Tanzania.

Joseph pockets between 35,000 to 50,000 Tanzanian shillings a day from the sale of water he fetches from abandoned mines.

According to him, a twenty-liter plastic jerrycan costs 500 Tanzanian shillings at the hamlet. He is able to carry between 70 to 100 jerry cans a day using his bicycle.

“Water business is my life, I serve my family in Dar es Salaam because of this business,” said Joseph.

However, they may not be aware of the danger because there is no health facility at Itumbi. Patients are sent to other areas with health facilities and the nearest is 16 kilometers away.

Unclean and unsafe water:
World Health Organization (WHO) defines sanitation as provision of facilities and services for the safe disposal of human urine and faeces. Inadequate sanitation is a major cause of diseases worldwide and improving sanitation is known to have a significant beneficial impact on the health of communities. 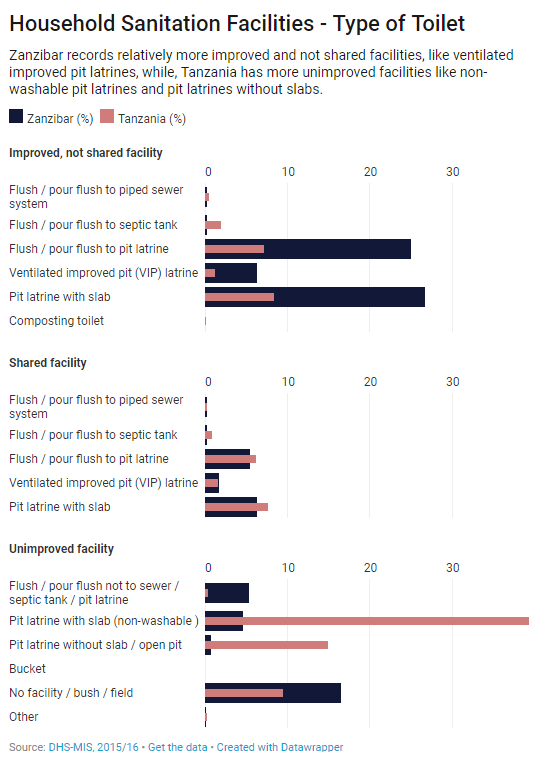 Water shortage and sanitation is a common problem in most mining communities in Chunya District, most of them depend on unsafe rainy water filled in abandoned mining pits.

Joseph is among many water sellers scattered in gold mining communities in Chunya District, to them it is easy money because their consumers do not care about quality and safety of the water.

The water is fetched from abandoned mining pits; most of them are hardly six meters deep. The pits are filled with water during rainy season which is neither clean nor safe.

Seasoned streams are other water sources for these communities. Residents dig a few feets to get water. There are also water wells, but very few. Itumbi hamlet for instance, with a population of over 4,000 people, has only one water well. Water from this well is sold at 500 Tanzanian shilling a jerrycan of twenty liters.

Majority members of these communities use unsafe water from the abandoned pits, which they usually drink without boiling.

“I fetch water from the abandoned pits for domestic use, I do not boil and people just drink,” says Rehema Fannuel, a food vendor at one of the camps near Itumbi Hamlet.

Some mines owners pump water from their abandoned mines for gold processing and domestic use as well. The water is not treated before use.

Ramadhan Mwakagenda, a resident of Itumbi insists that the situation is worse from the month of July up to the beginning of the rainy season. Most streams in the district, dry up during the dry season.

Even the flow of Lupa River is limited during the dry season; it remains with spots of ponds. The water is used by both, human beings and animals, mostly hippopotamus.

“Their water is not clean and safe, needs to be stored in tanks and treated, and then it will be safe and useful for human consumption,” says Chunya district medical officer, Dr. Stanford Mwakatage.

Waste disposal, a major challenge:
Mining communities in Chunya district live in squatters which complicated their hygiene. In particular waste disposal is a major challenge to majority of households in this area. In case an epidemic erupts, it would be a major disaster.

This is contrary to World Health Organization (WHO) standards, which focus on provision of facilities and services for the safe disposal of human wastes such urine and faeces.

The organization cautions that inadequate sanitation is a major cause of diseases worldwide.

Statistics issued by the Director of Makongorosi Township Authority, Linus Mwaitega show that hardly 30 percent of the 4,000 Itumbi Hamlet residents in Matundasi Ward in the district have access to pit latrines and the remaining practice open defecation.

“ Latrine is not part of their housing. It is not their priority. They they dispose off their human wastes anywhere, mostly in bushes,” says Chunya District Medical Officer, Dr Mwakatage.

At one of their gold processing plants I visited during my survey, there was one pit latrine built with polythen papers. However when visitors need the service, they are told the place has none.

“We do not have toilet here, I go home whenever I need the service,” says a laborer I met at a processing plant.

The recent cholera epidemic in the district was reported last year, 2017, when 150 cases were recorded, amongst which three died.

However, according to Dr. Mwakatage, it is complicated to collect data because most of the mining communities do not have health facilities.

“Data collection in gold mining communities is complicated, they do not have health facilities,” says Dr Mwakatage.

Government interventions:
In a move to arrest the situation, the government in Chunya district has started construction of a health facility at Itumbi hamlet, the measure medics in the district say could enable them collect significant data on diseases.

“We have started construction of a dispensary at Itumbi, it will help us collect patients’ statistics and provide counseling,” says Dr. Mwakatage.

There is a major tap water project for Makongorosi Township going on. According to the township Director, Mwanitega, the project will also benefits the gold mining community of Itumbi hamlet.

“Our bylaws require every household to have better toilet and better domestic water management. The project begins with Itumbi hamlet,” says Mwanitega.

Small scale gold mining is a major economic activity in Chunya District, Mbeya Region. Even though their gold mining activities contribute a lot to the national economy, their communities face serious sanitation and hygiene problems.

This report on poor sanitation among Mbeya Region’s small scale mining communities by Felix Mwakyembe was made possible thanks to support from InfoNile and Code for Africa.